The storms in Joplin, MO serve as yet one more reminder of the important roles social media play in a crisis. It seems after every event social media serve these same 5 or 6 functions:

1. Documentation of the event.

Photos and videos are usually the first thing to start coming across the social media “wire”.  This is not lost on the national news media. This tweet above is by NBC Nightly News and they ask people to”tweet or email us your photos & videos”. The Missouri government has also asked for people to send in their pictures and videos:

But there were plenty of pics circulating through social media immediately after the event.  Here is an interactive photo stream that has some very dramatic shots, including of the hospital that took a direct hit. 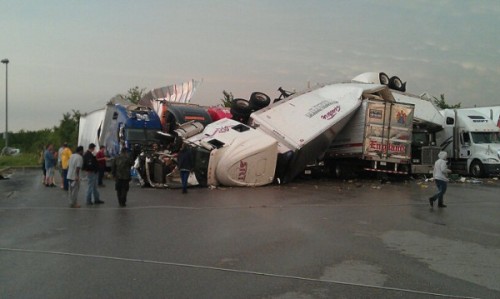 The picture above was shared through twitpic and is of tangled semi-trucks,  illustrating the power of the storm. Click here for a larger image. (Picture via twitpic @cris34k) The YouTube video that seemed to be the most widely circulated was one with little images at all. It’s popularity (over 37,000 hits at time of writing) is probably due to the shear terror in the people’s voices. One of my fellow twitter friends pointed out that the video also demonstrates people’s ability to remain calm and help the others in the room. Listen to it yourself, but be prepared to tear up.

In the immediate aftermath of the storm people in the impacted and surrounding area found trying to use the regular phone lines an exercise in futility and turned instead to social media and texting. This was mentioned briefly in an article about the storm in “The Wichita Eagle” newspaper:

Phone communications in and out of the city of about 50,000 people were largely cut off. Travel through and around Joplin was difficult, with Interstate 44 shut down and streets clogged with emergency vehicles and the wreckage of buildings…

Some people [on social networking sites] were quick to post that they and their families are OK, or to get the word out that loved ones are missing or homes were destroyed. Others found themselves without access to phones because of overburdened phone lines, but able to text and use social media.

For those who were not able to find their loved ones immediately, the American Red Cross has also set up a “Safe and Well” website. People can register themselves as safe and family members can search through the registry. This information has also been widely circulated through social media sites. It seems not everyone is using the Safe and Well resource, however. There are many places to find people asking for information about their loved ones. Some are just simply tweeting the name of the missing and asking for folks to (RT) retweet the information so that it reaches as broad and audience as possible. And, almost every social media site I visited has some element of missing persons.

One Facebook page that was created to assist people find loved ones is entitled: Joplin Tornado Citizen Checks : neighbors helping neighbors. This page was stood up less than 24 after the storm and already has almost 3000 “likes”.  The info tab does not give any description of who created the page, but under the content tab it states:

If you are looking for someone- please post ONE thread in the Discussions, with the name and general location of the person in the title. Others, please scroll the discussions to see if you have any information about people being searched for.

I’ve seen many, many postings from out of state family members asking about the elderly or those who live alone. We need a grassroots effort to help neighbors out. Please post where you are located, and someone can post on your comment if their family member lives nearby enough for you to check. We need to help each other!

Here is an incomplete list of hospitals that took St Johns patients and people injured in the tornado:

This function via social media is just gearing up (less than 24 hours after the storm), but with that said, there’s already quite a few lists of where to donate items and where to receive help. The State of Missouri itself is working to build a list of aid dropoff locations and sent out the following tweet:

@mogov Working to build a list of aid dropoff locations for #Joplin, any help is appreciated:http://bit.ly/lzkrp9 #MOneeds#MOhaves

On Craiglist a Joplin Tornado Volunteers List has been created that has aggregated information about the storm to including useful Facebook pages and crowd sourced maps. This “Joplin Tornado How-to-help”  page set up by msnbc.com, however, seems to have an even better list of online resources.

One Facebook page entitled: Joplin, Mo Tornado Recovery is up and running and has almost 73,000 “likes”. I honestly can not tell what organization has put this page up, but the “about” page states:  “Find out how to help those suffering from the Joplin, MO tornado. To find disaster information, shelter information and referrals, please call 211…”  So far this page mostly has posts from well wishers as well as people interested in helping and asking about what items are needed and where to go, etc. There is also a mix of people mentioning loved ones that are missing.

A  crowdmap powered by the Ushahidi software has also already been stood up, and as of writing, reports include information about donated items as well as information regarding where to go to volunteer.  There are also reports of people missing. Here’s a sample:

5.  Recovering Lost Items (Pets, and in this case Hospital records!)

One very interesting aspect to this disaster is the personal hospital record data that was strewn across 60 miles. One person on twitter indicated it was a HIPPA nightmare. It seems that people are being honest about wanting to return the found items and St. Johns will be using their facebook page to direct people on how to do that. As you can see in the item below, right now they are telling people to just “hang on to these items at this time”.

Lost pets are always an issue after a crisis and social media helps people find their lost furry or even feathery loved ones. The facebook page Animals Lost and Found from Joplin, MO, Tornado  has over 2000 “Likes” less than 24 hours after the crisis, and as of time of writing, has people posting to the site about once per minute. The site includes a lot of people posting that they can foster animals and that they are willing to help in other ways as well, and of course, there are some pics of missing and found animals. This site doesn’t seem to be hosted by the humane society or the ASPCA, but does appear to be modeled after the Animals Lost & Found from the Tornadoes in Alabama on 4/27/11 (which has over 32,000 likes).  I can’t help but wish people would post their credentials to these facebook sites, or at least write on the info tab who they are. Nonetheless, they are popular and they appear to be doing a good job.

One last item, that might be the most important of all–government agencies are reminding people that they should not self-deploy to the scene of this crisis: