#SMEM Challenge for 2013: What do I post? Are you ready to be amazing?

It is easy for emergency managers to learn   social media in terms of the purely technical aspects–these platforms are pretty straightforward to use. However, one of the complaints I often hear, is “Now what?” Never before has the EM community been expected to communicate with the public on an almost daily basis. Once an emergency manager has a Twitter feed and a Facebook page they  understand that they have to post something so that it doesn’t look like a ghost town, but what?

Deciding what to post is not usually a problem during an emergency or a disaster situation, but social communication during the preparedness phase can be  challenging (even after an organization has determined they will invest time and resources to the effort). There are several inter-related issues to consider:

In bigger communities it is increasingly common for almost every department or agency to have their own social media account.  The Department of Transportation is likely to be posting information road closures, traffic problems, and real-time road conditions during storms:

@MayorSRB Primary roads have been treated using 619 tons of salt. All 311 requests have been abated. The weather is expected to end at 3PM.

Police Departments tend to post content about  a wide range of activities from car crashes, to arrests, to the weather, as well as safety tips.

It only takes 10sec for a thief to take anything left in your car. From CDs, gym bags etc! So, when you leave your car, leave it empty!

Fire Departments often provide updates about where they are responding, fire prevention tips, and general safety information as well.

BCFD reminds public that high winds can bring down trees and power lines which create dangerous conditions for everyone. Avoid at all cost!

So, where does that leave the Office of Emergency Management?  If all of the “sexy” up-to-the minute content is being reported by other agencies, what’s left to be said? Even once your agency decides what “lane” you should be posting in, it’s still possible that other city or county agencies will infringe on your territory. I have heard statements from some annoyed EMs such as: Why did the Fire Department post emergency preparedness content? That’s my job!

Solution:  In order to prevent “social-media envy” coordination and collaboration are key. The results of coordination could manifest in a city or county-wide written content strategy or simply in a verbal agreement regarding expectations. However, it is important to keep in mind that in the social media world, repetition of a message is NOT a bad thing. Your Tweets and Facebook updates  are never seen by everyone that follows you (see Jim Garrow’s article “The Demise of Facebook” in which he points out how few people actually do see what you are posting in their feed). Therefore, amplifying each other’s messages should be an overarching goal.  Here are two great examples of how this is done and communicated to the public in Baltimore.

I like the Tweet immediate above this paragraph because it also denotes  the type of content OEM will provide and when. I have heard concerns from emergency managers that once they start posting something, such as road closures or the weather, the public complains when they stop. One social media admin told me “The public now thinks I’m the weather man.”  However, continuing to post the same information daily can turn your feed into a very boring presence, ultimately reducing the amount of community engagement and interactions.

Solution: There are two ideas to consider:

Whether or not we want to admit it, the “Be Ready” message gets very little traction when there isn’t an emergency.  Posting “Are you Prepared?” along with a few tips to your Facebook page does not mean your community is now more resilient.  In fact, they are probably ignoring this message altogether. Why? Frankly, it is boring.

What works? Storytelling. Stories  do many things: reshape knowledge into something meaningful; make people care, transcend one’s current environment; motivate; and give meaning, among other things.  In a blog post titled “The Importance of Storytelling in a Digital World”  the author discusses why TED Talks (the ultimate in digital storytelling) work. His logic applies to all digital communication:

A great example of storytelling in emergency management this year was from  “Ready Houston” with the video: “Run. Hide. Fight,” embedded below. This 5 minute video holds viewers attention and has received over 1.8 million hits. The protective action measures the public should take during a shooting incident are demonstrated via the story of an attack in an office building. It was also successful because, unfortunately, it is all too relevant for the times we live in.

Solution: What are we trying to do here? We are trying to change behavior, which is not an easy task.  Posting “Get Prepared–here’s your list” is probably not going to get anyone off the couch. A little more work might have to be involved.  (For some reason I’m reminded of  kid in the movie The Incredibles who’s asked “What are you waiting for?” and he says, “I don’t know. Something amazing, I guess.”) See the video clip below, just for grins.

What can you do? You don’t have to invest thousands in producing slick videos, but you can find a family in Home Depot shopping for winter supplies and take a pic. Ask them why they are getting prepared and post that. Or repeat news stories (even older ones) about someone that almost died in their car during a snowstorm because they didn’t have food or blankets in their car.

Storytelling can also be short and sweet.  The Brimfield Police Department, whom I’ve written about previously, tells little stories that amuse, and get people to act and engage. Below are two posts from their Facebook page. The second one had almost 1500 “Likes” and many comments. 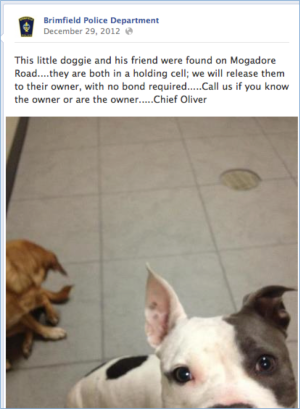 Let me know, are you ready to provide good content for 2013? What’s your plan to be amazing?

See this video which demonstrates how boring “data” can be enthralling when given meaning and context.

Posting Strategy: Let Your Conscience Be Your Guide

When looking for a Brimfield, Massachusetts Facebook page I came across the Brimfield, Ohio Police Department’s page. That little mistake has turned into quite a happy accident since the Ohio page is filled with many interesting examples to draw upon. You don’t have to look any further than their comment policy for some idea of what I mean. Here’s an excerpt:

“For those of you just joining us….Our legal people said we need some type of rules for our FB site; so we avoid fussing, I guess. They suggested a “take down” or “removal” policy. I declined both. I  told them I would handle relaying the message…

This is a police department Facebook page. If you have reached it by mistake or you are overly self righteous or are offended easily, you will hate it here and you will certainly dislike me greatly. We tell the truth, from the the field. We deal in realities. We post stories some may find funny, sad or other touchy feely stuff. We do not post names or mugshots, because we are not the National Enquirer. If you know the people involved in crashes, driving drunk, selling drugs or committing other criminal offenses, I would not get on this page and announce it.

If I make you angry, email me at doliver@brimfieldpolice.com or call —. If you attack me or my officers in this public FB forum, expect me to take you to the woodshed in the same forum…right before you are removed from the site. I believe in public praise and private criticism.”

When I spoke to Chief Oliver about his page over a month ago he told me that he had a content strategy that was exactly 3 words long: “Tell the truth.” Talking to him was really enjoyable since he didn’t mince words about how and why he was using the page and social media in general. He said for one, he is the head of a public service agency and therefore information should be released to the public in a consumable format–and Facebook happens to be a great way to reach the local audience. For two, the content they post is not secret, so why not? What he said exactly was “We’re not freakin’ James Bond here.”  Another thing that he said that stuck with me was “It’s made us human.”

I “Liked” the page (of course–this is one to watch) and in my news feed this week one of their posts intrigued me. The Chief had a long explanation about an item they would NOT be posting. I’ve never seen anything quite like this so I wanted to share it with my readers.

Remember when I told you if I made a mistake, I would own it and apologize for it? Stand-by for that…

We have warrants for over 250 people. These are people who have failed to show up for court on a variety of charges. Heroin possession, identity theft, OVI, robbery….we have a bunch of people who need to be seen by the judge…and they won’t show up for court. So, in my infinite wisdom, I got the idea to post pictures of some of these individuals on our page in order to generate some leads and clear up some of these warrants. I am not the kind of person who posts pictures or names on our page. We will NOT be a tabloid style page. I get enough grief for being outspoken; I don’t need more for something I really don’t want to do anyway.

So, with bright idea in mind, I posted the first (and last) three wanted persons last week. The normal amount of insults and opinions flowed through…we did get some leads; but then something else happened….A juvenile child of one the “wanted people” contacted me. In posting those pictures I overlooked the one thing I stand for the most….the children. You see, even though the adults are wanted and may be in the mope stage of their life, they may have children. Those children are likely on Facebook. I can imagine no worse feeling as a child than seeing mom or dad listed on a police department Facebook page, under “wanted persons”.

So, although it is perfectly legal to post pictures of people wanted by police, because it is all public record…it may not be the right thing to do. In this case, while I am in charge…it is most definitely NOT the right course to be on and we won’t go that direction. Absolutely regardless of the conduct of a parent- the child should not pay the bill. Children should not suffer because their parents cannot act like adults. Alienating these children from police and other authorities drives them further towards a life which will lead to trouble. I cannot do that. I am supposed to look out for them….and I will. “I am sorry” goes to the children who saw those posts. Look at the example of the life you have been exposed to and break that cycle…you can do it.

We do not have to be a product of our environment if we choose not to be……Chief.

What are your thoughts?  What would you do or do you do? How do you balance the need to release information versus the need to be a part of the broader community and not embarrass someone’s children–and potentially cause them to become scorned? Let me know what you think.