What’s Open? A tool to find businesses after a crisis.

After a crisis, a simple question can be complicated: what’s open? Even after a minor snow storm some businesses alter their hours of operation and finding that information can prove frustrating for customers. I don’t often blog about private companies, but I really like the format and simplicity of the new website  called, quite appropriately, “What’s Open” by  the Vibbre company in Christchurch, New Zealand.

All business continuity plans should include ways to inform employees, suppliers, customers and local emergency services of operations after a crisis. The use of social media tools to keep these stakeholders informed is growing, and I have even seen examples of small businesses tweeting that they have supplies in stock (“We still have shovels!”) 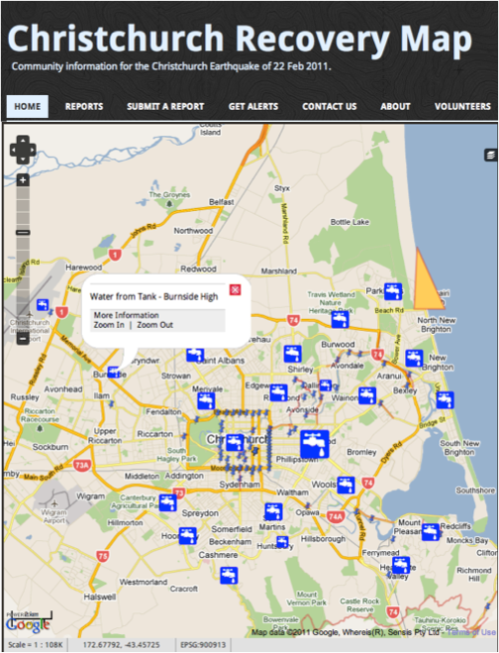 in the lead up to a storm. Ushahidi, which was deployed after the New Zealand Earthquake and the Australian flooding disaster, is also a data aggregation and visualization platform (ad free). It can be used to inform the public of where to find supplies, and in both cases, included categories to help locate ATMs and essential items such as fresh water.  Other data, including infrastructure damage, could also be found on the map.

The “What’s Open” tool, however, is strictly focused on businesses. 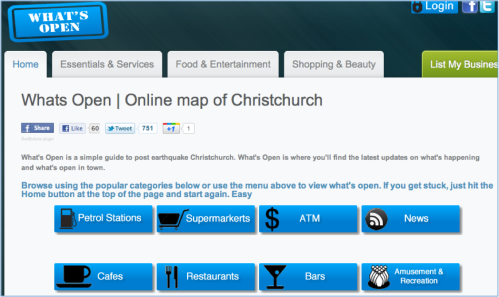 The organizers of the site list their objective as a way to “help connect the people of Christchurch with their local businesses so everyone can get back to their feet.” The site is free for business and consumers to use, but they are soliciting for retailers to buy the banner ad space at the top of the home page.

The map gives users a quick view of what is open in their vicinity and provides a platform for establishments to post information, including specials and coupons, in addition to just their hours of operation. 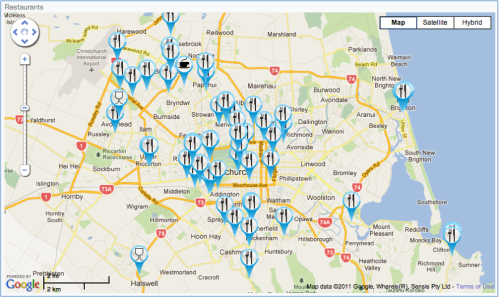 Some people might balk at the notion of visiting a site after a crisis and seeing banner ads. However, I think if the site can be self-sustaining it might mean more valuable data is available in the immediate aftermath, or even before, an event. Just as an example, think how handy this list would be as Irene spins up the East Coast. I could envision evacuees looking for Hotels that take pets, for instance.

What are your thoughts? Should services such as this one have advertisements?

Fellow blogger, John Solomon, has been gearing up for the September, 2010 National Preparedness Month by writing a series of posts about FEMA’s efforts.  He reports that FEMA is incorporating new media and technologies into their monthly activities, in particular by launching the new mobile application: m.FEMA.gov. Solomon also mentions an Emergency Plan for individuals and families FEMA developed along with the Ad Council that has a text or email feature.

“This application is designed to aid you in assembling a quick reference list of contact information for your family, and a meeting place for emergency situations. …you can paste it into email or text documents you can send to others or save on your computer.”

Although this effort is laudable, why not remind people to enter this information into their cell phone and then create an emergency contact “group” (most phones allow for this). Once the group is created one text can be typed and sent to everyone in the group. Or, why not ask the cell phone companies to publish how to make these groups on each of their different cell phone models for use in emergency situations.  Groups, of course, are quite easy to create on Twitter and Facebook, and are also available as a mobile application on smart phones, but FEMA’s preparedness site is completely mute regarding these new technologies. [picapp align=”right” wrap=”true” link=”term=facebook&iid=8921402″ src=”http://view1.picapp.com/pictures.photo/image/8921402/facebook-executives/facebook-executives.jpg?size=500&imageId=8921402&#8243; width=”234″ height=”176″ /]

Furthermore, the “Ready Business” page that details how to write a crisis communications plan was last updated February 6, 2008. Technology changes rapidly, and this recommendation seems antiquainted:

“Set up a telephone call tree, password-protected page on the company website, an email alert or a call-in voice recording to communicate with employees in an emergency.”

Instead companies, even small companies, can turn to social media to communicate to both their employees and their customers. Many free or inexpensive options are now available:  SMS text messaging;  Yammer, which is a closed network for a subscribing company; Twitter and Facebook,  just to name a few.

Moreover, the business crisis communication’s plan provided by FEMA doesn’t include any advice on new technologies that are available to assist in keeping in touch with employees after a disaster–(for example,  Safe and Well developed by the American Red Cross or other web-based tools now available to track people). Companies could also employ a closed-group service such as Yammer, for this purpose.

Business continuity consultants are beginning to understand the power of social media, and FEMA really is trying to amp up their  social media efforts,  yet it might take a while before it filters into every part of the agency.