The Work of Disaster Reporting in the Age of Digital Distortion 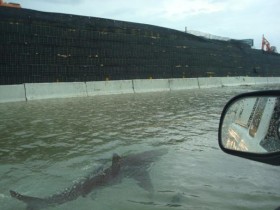 Academics from IBM Research Labs in India; Indraprastha Institute for Information Technology, Delhi, India; and the University of Maryland, Baltimore  County collaborated on an article titled: “Faking Sandy: Characterizing and Identifying Fake Images on Twitter during Hurricane Sandy.” This article is interesting in light of the events in Boston and the debate about the veracity of content on social media. Although there hasn’t been time to do complete quantitative data analyses of the Marathon bombing social media feeds, this research adds to the increasing collection of academic studies that can help us better understand how misinformation is distributed on social platforms, specifically Twitter, and how  it can be easily and quickly identified as false.

In today’s world, online social media plays a vital role during real world events, especially crisis events. There are both positive and negative eﬀects of social media coverage of events, it can be used by authorities for eﬀective disaster management or by malicious entities to spread rumors and fake news.

The aim of this paper, is to highlight the role of Twitter, during Hurricane Sandy (2012) to spread fake images about the disaster. We identiﬁed 10,350 unique tweets containing fake images that were circulated on Twitter, during Hurricane Sandy. We performed a characterization analysis, to understand the temporal, social reputation and inﬂuence patterns for the spread of fake images. Eighty-six percent of tweets spreading the fake images were retweets, hence very few were original tweets. Our results showed that top thirty users out of 10,215 users (0.3%) resulted in 90% of the retweets of fake images; also network links such as follower relationships of Twitter, contributed very less (only 11%) to the spread of these fake photos URLs. Next, we used classiﬁcation models, to distinguish fake images from real images of Hurricane Sandy. Best results were obtained from Decision Tree classiﬁer, we got 97% accuracy in predicting fake images from real. Also, tweet based features were very eﬀective in distinguishing fake images tweets from real, while the performance of user based features was very poor. Our results, showed that, automated techniques can be used in identifying real images from fake images posted on Twitter.

The last sentence is the most important: “Our results, showed that, automated techniques can be used in identifying real images from fake images posted on Twitter.” Hopefully, those automated approaches will be available to use quickly and intuitively without needing to know how to write an algorithm on the fly. There are people working with that goal in mind. See this great post “Automatically Extracting Disaster-Relevant Information from Social Media” by Patrick Meier–where he describes his efforts  “to develop open source and freely available next generation humanitarian technologies to better manage Big (Crisis) Data.” A software solution is on the horizon.

Why do people post false information? That interesting psychological question was not addressed in this study. Maybe people think an image of a shark swimming the street is funny; maybe they are out for a minute or more of fame.  I, for one, am increasingly leery to ReTweet any photo when an event is unfolding unless I see it on several sources (e.g. on Twitter and also streamed live from a “traditional” local news station). Tell me, how comfortable do you have to be with a source before you hit “ReTweet?”

Thank you @janehenrici for the title! I had posted “Are those photos for real?” I hear the phrase “Is that for real”  in my house full of teenagers and was just trying to be “witty.” I like Jane’s title much better though. Let’s call this crowdsourced blogging!