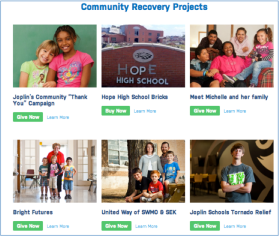 Anyone who follows me will not be surprised by my choice of Rebuild Joplin for one of the top SMEM examples of 2011.

The story: After the EF-5 tornado ripped through  Joplin, Missouri  affecting thousands and killing 162 persons, community leaders not only had to deal with the crisis at hand, but also a veritable tsunami of donations and volunteers. Matching needs to these resources,  however, can be an overwhelming task unless there is a system in place. Joplin  did have a system via an existing program in the school system called Bright Future.

As I wrote in this post, Bright Futures’ pre-crisis mission was simply to connect the needs of impoverished students with resources in the community with the overarching goal of increasing graduation rates.  Social media facilitated this transaction by communicating needs and allowing for a conversation to take place with community members wishing to help.  Organizers found that they could find the resource for a child, such as a pair of shoes, within a matter of minutes after posting. The social platform also allowed for both thanking the donor and to stopping further donations or offers by making it known that the need had been met.

Post-crisis,  Rebuild Joplin was launched to do this same type of service community-wide. 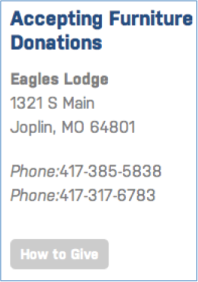 What they did right:

I don’t think it can be said that every single item or in-kind donation was processed through this site during this event, (which is in the long-term recovery phase at time of writing) nor was their social media presence the only one facilitating donations (many sprung up organically). I would also like to see a way to  pull in more information via twitter feeds, however, as a model for donations management, this is a darn good start.

As a side note, the community has also come up with a way to thank each and every volunteer via the oldest media: handwritten notes. Of course they have a YouTube video describing the effort!