This is a summary of the weekly chat on the twitter platform using the hashtag #SMEMchat (Social Media for Emergency Management Chat). I was the host this week, and the topic was Social Media for Situational Awareness.

Using social media to provide the public with information (i.e., pushing info) seems to be increasingly gaining ground with the emergency management community, especially since each new crisis brings to our attention examples of how others are effectively using it in this capacity. However, monitoring social media to gain situational awareness (pulling info) is another prospect entirely.  We discussed some of the perceived and genuine problems with using social media for this purpose.

The first question was aimed at institutional challenges to adoption:

It seemed the answer should be a mix of all of these challenges, which I guess it probably is, but most people seemed to think emergency management culture was the biggest barrier. James Hamilton stated: “Without a doubt, in circles I have been in at the State level, culture is the largest hurdle to adoption.”

Lack of resources was also mentioned as a concern, especially when it comes to processing information during a crisis. But, going back to culture, a recent article about citizens trying to persuade their local OEM to participate in just using social media to push information, reminded me of what a large hurdle this really is. The SouthHold Town Police Captain, Scott Flately stated that: “… he was not sure the additional work involved in using social media in emergency weather situations was worth it or not. Flately noted he has increased his efforts to notify news media of road closings, down trees and accidents during severe storms this winter.” As far as using social media to gain situational awareness he states: “The 911 system we have in place works.” During the chat people reminded me that 90% of the OEMs they talk to do not use social media at all. 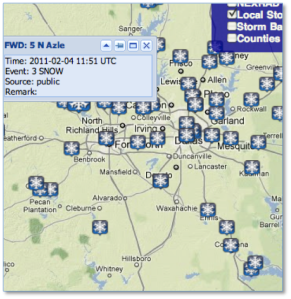 This question set off a debate about the NWS program, some indicated that the NWS specifically refused reports via social media, however, an experiment is ongoing in North Texas to do just that. (The pic on the left is crowdsourced data from the NWS). Kate Starbird, a Phd candidate from University of Colorado studying crisis informatics, made a great point that many people seized on: “If you look at larger trends rather than individual reports, then trustworthiness can emerge from consensus.”  This NWS map, illustrates her point. One “public” person reports 3″ of snow and then 5 miles away a trained weather spotter reports the same amount; the trustworthiness of the “public” person just increased. Furthermore, by taking lots of reports and aggregating them, a full story can emerge and outliers can be eliminated. As some said on the chat”the math works”, others indicated: “Data mining tools should help with trust by consensus.” Kate Starbird stated: There’s a layer model: collect, use tools to filter, use crowdsourcing to vet, use more tools to distribute.”

Another interesting thread of conversation emerged: How do you measure trust, particularly if you  are not using aggregation tools that apply mathematical models to weed out false reports? David Wild asked: “Is the fact that you follow someone on twitter a measure of trust in their report?” David answered his own question by stating that the NWS proved a few years ago that “quality from quantity is better than quality by selection.” (In other words, the truth will be the average). Hal Grieb recommended that the emergency management community should use the same individuals that the NWS uses as trained spotters.  James answered that trust could simply have to do with reference point. Also, chat participants indicated that information accompanied by a picture is hard to deny.

In terms of relying on information from individuals, I asked about using business partners as trusted agents. Glen Gilmore, a social media marketing guru, agreed by stating “trust is often local.” Mr.Gilmore went on to say “trust takes time; it’s not a matter of “following” , but of listening & sifting.”  People seemed to agree with this by stating the importance  of  building a social media presence before an event. Ms. Starbird wrote that in events, locals sometimes create new accounts to report. The “FireTracker” stated: “Public will trust established local, over newcomer “official”. One great point by @g_r_e_g was that social media can be combined with other information: “be sure to include other tools, too, like call volume, e-mail, media reports, not just social media.”

The notion that emergency managers need more data mining tools in order to establish trust by consensus seemed to receive a collective “YES!” There are only a couple of these tools currently being developed, Swiftriver, which I have mentioned on this blog, is one of the few.

The FireTracker also suggested, that in terms of organizational structure, that “As you establish Incident Command” and RIT, maybe establish a Social Media officer at the scene of the incident.” This would give you a trusted agent for sure!

Q3: Even though the discussion of tools for filtering social media had already been brought up, I specifically asked: What tools do you use/need to automate Social Media monitoring for Situational Awareness?

I know quite a few people in the emergency management community use tweetdeck and google real-time searches. Hal Grieb reminded us of a list of tools on one.forty.com. Tools that can integrate information that comes with a geo-tag were also mentioned as something to look forward to.

@g_r_e_g through some water on the party: “Automated monitoring is fine, but how is info analyzed especially in the Joint information center/Emergency ops center/ and Incident command system settings? Pictures/tweets are great, but then what?‘

Q4: The next question: Can volunteers be used to help sort thru comments and @ messages in ur EOC?  Is anyone using volunteers?

Alicia Johnson thought volunteers could be an option; and she also asked if local media could help curate information. Jeff Phillips, EM from New Mexico, indicated volunteers could be used and “they don’t even have to be IN the EOC.” Some agencies, however, are quite reluctant to open the door to volunteers to be used for the purpose of social media monitoring, especially those that are not comfortable with the medium in the first place.

Kate Starbird brought up how crowdsourcing was used to aggregate citizen reports on the Ushahidi platform. “Crowdmap for Chicago used volunteers–some trained some spontaneous to verify, map & route information during the recent blizzard”. But as a counter point, James stated “Big problem with crowdsourced situational awareness data is time and manpower to search/sort. Why apps are needed to automate.”

Hal Grieb stated: “Data mining is great but need more investment in web 3.0 and the semantic web together with geolocation apps.” Greg indicated that he was a fan of adding syntax and bringing WebEOC or other CMIS for tasking/posting (versus volunteers). But this doesn’t seem like a short-term solution since, as James indicated: “Current WebEOC Twitter interface lacks true tasking & movement.” Others indicated that they want mobile capabilities.

To add another option I asked if the concept of using mutual aid agreements to help with volume of data from Social Media  for Situational Awareness should be explored. The FireTracker stated “Yes, but need legal framework ironed out NOW with MOUs.” Greg stated that you can have agreements with farther flung agencies, particularly to mitigate against the possibility of large-regional events. I found this to be a very salient point by the FireTracker:

“Social Media resource typing and standardization would go a long way towards Mutual aid planning and IMHO so you know what you are getting. CyberCert would play into resource typing, as well as Public Information Officers listed in ROSS, Non-Governmental Organizations and SUV Social Media volunteers.”

One participant asked if anyone was worried about intentional misuse or misdirection? Kate Starbird indicated that they saw a bit of that in Haiti. “Haiti-relatives reported hearing from loved ones to get responder’s MT.” This took us back to the whole discussion of trusted sources and the concept that math aggregation tools could help alleviate this sort of problem. (Of note, this points out the difference between using social media to direct resources to individuals or to just gain over-arching situational awareness. Of course, 911 is used to direct help to individuals in the US, whereas in Haiti Social Media became 911 by default.) However, it was noted that we should “plan for disruptive tools” because data can be easily corrupted.

The last question dealt with Mayors & City Managers using Social Media to post updates from the scene, sometimes essentially  bypassing the emergency management structure (e.g. by directing resources to citizens that “tweet” for assistance”). Since this article is already quite long, to summarize, people thought that it would be impossible to tell them that they should not be doing this: “Nature of politics!”. These mayors do provide a valuable connection to the residents by “talking” with them through social media, but politically driven promises can create challenges with regard to “expectations management.”